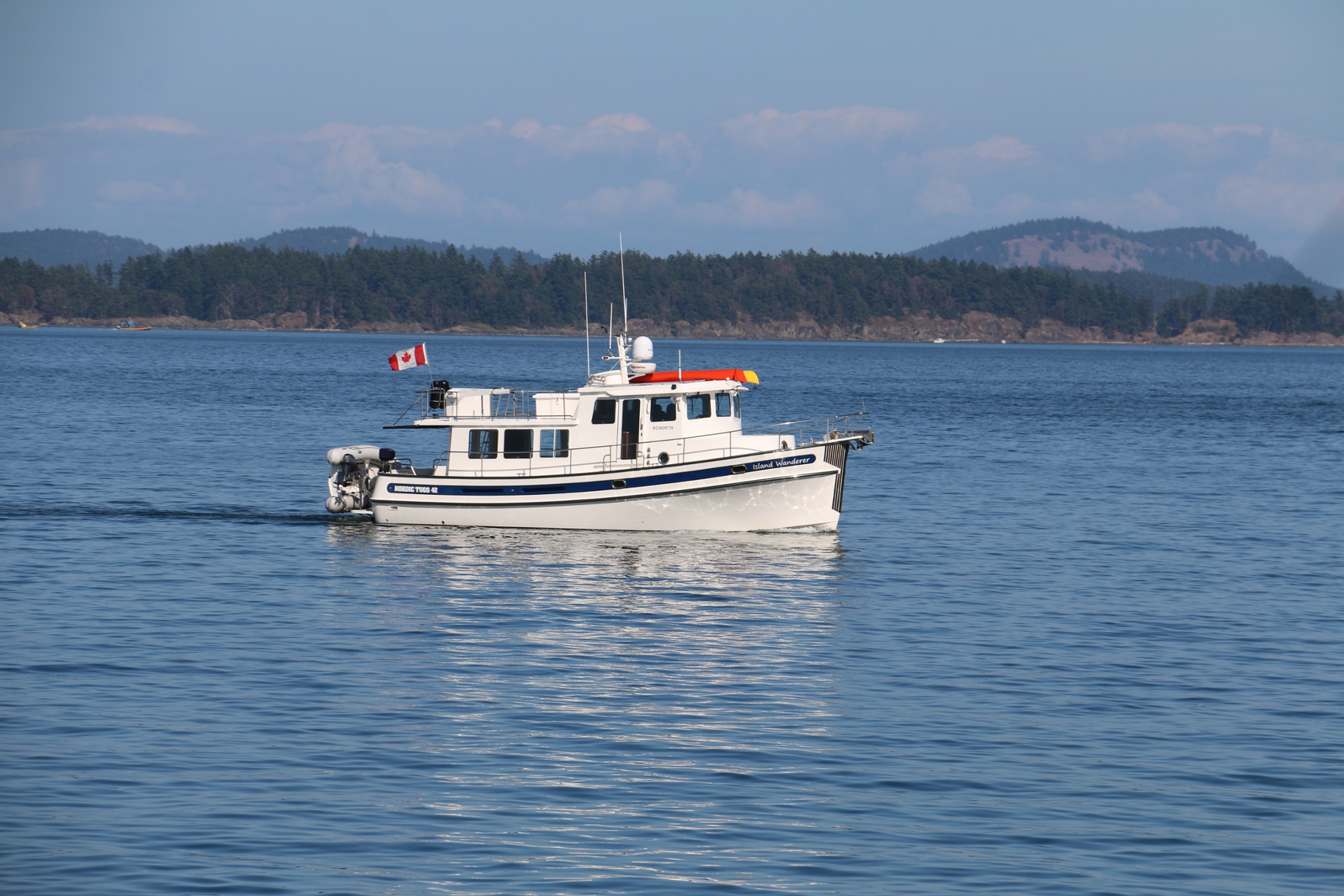 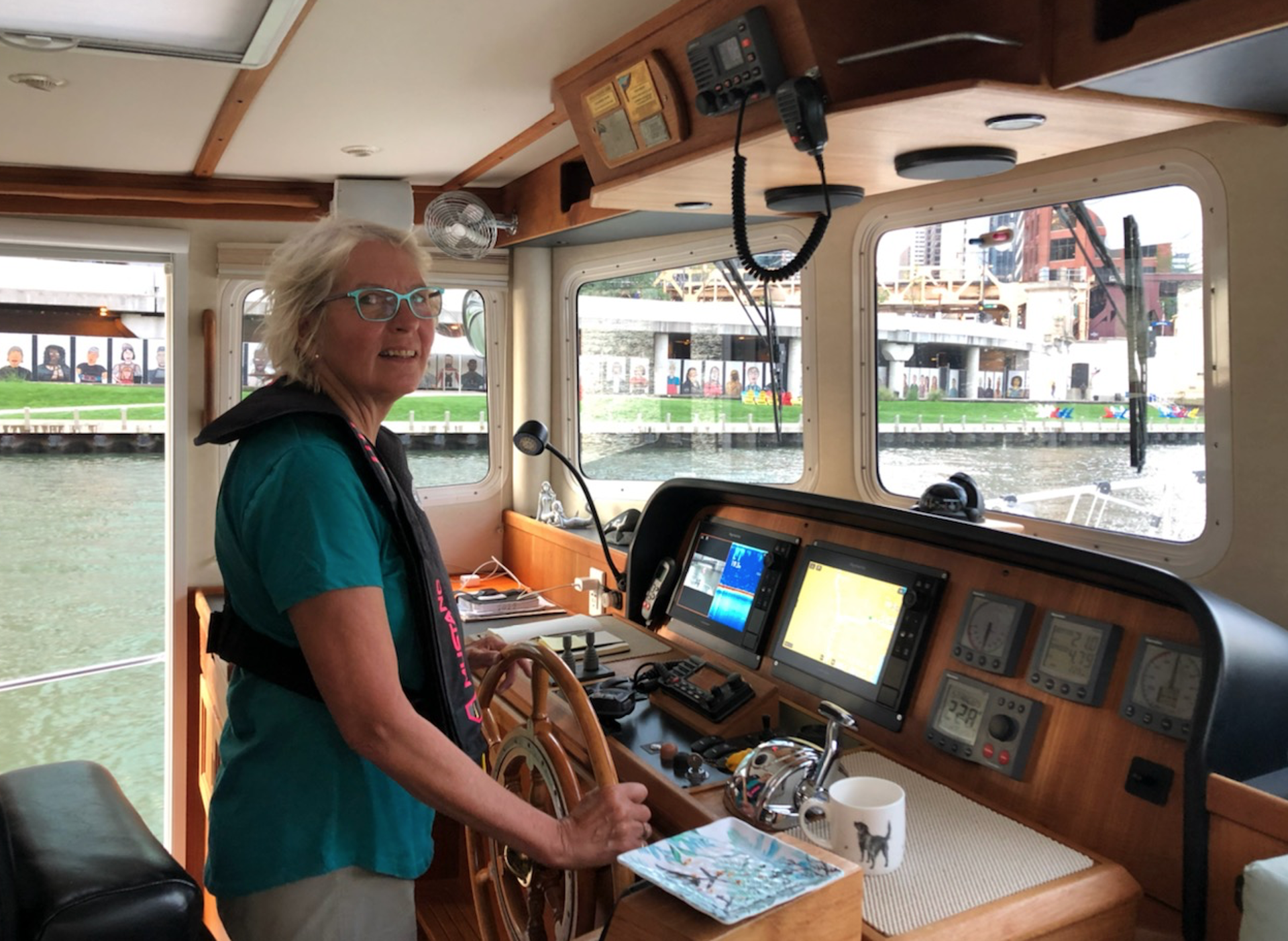 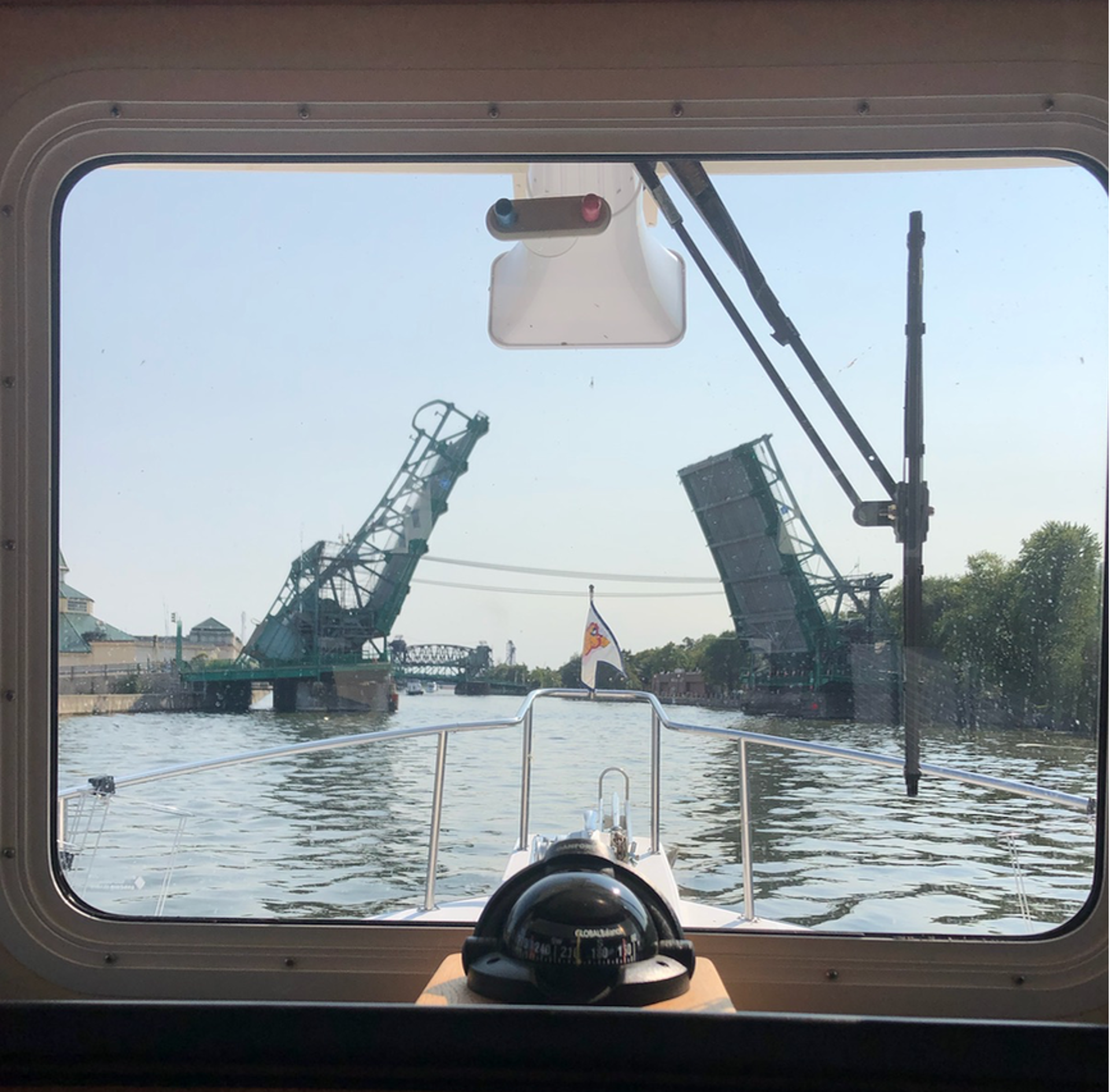 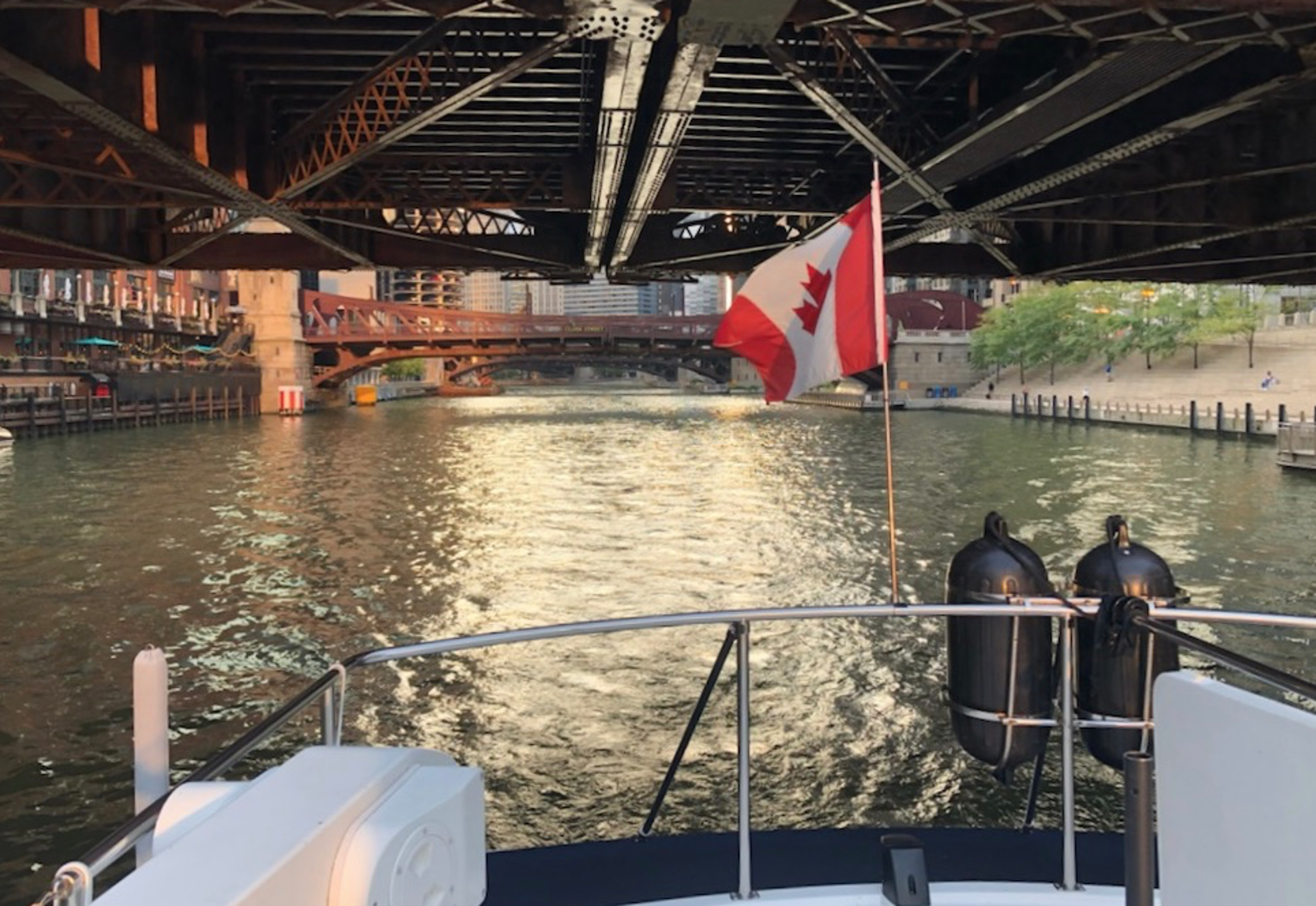 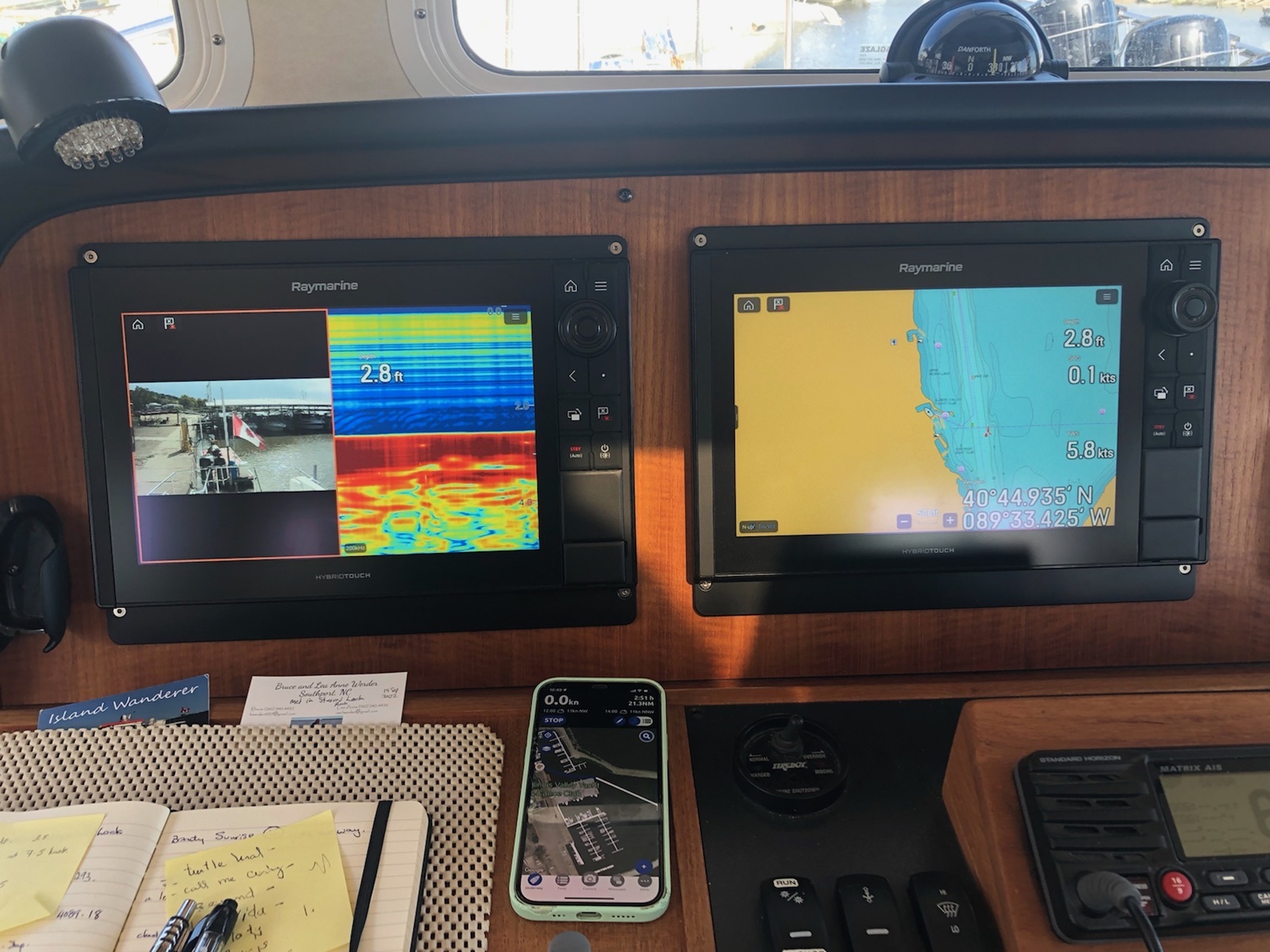 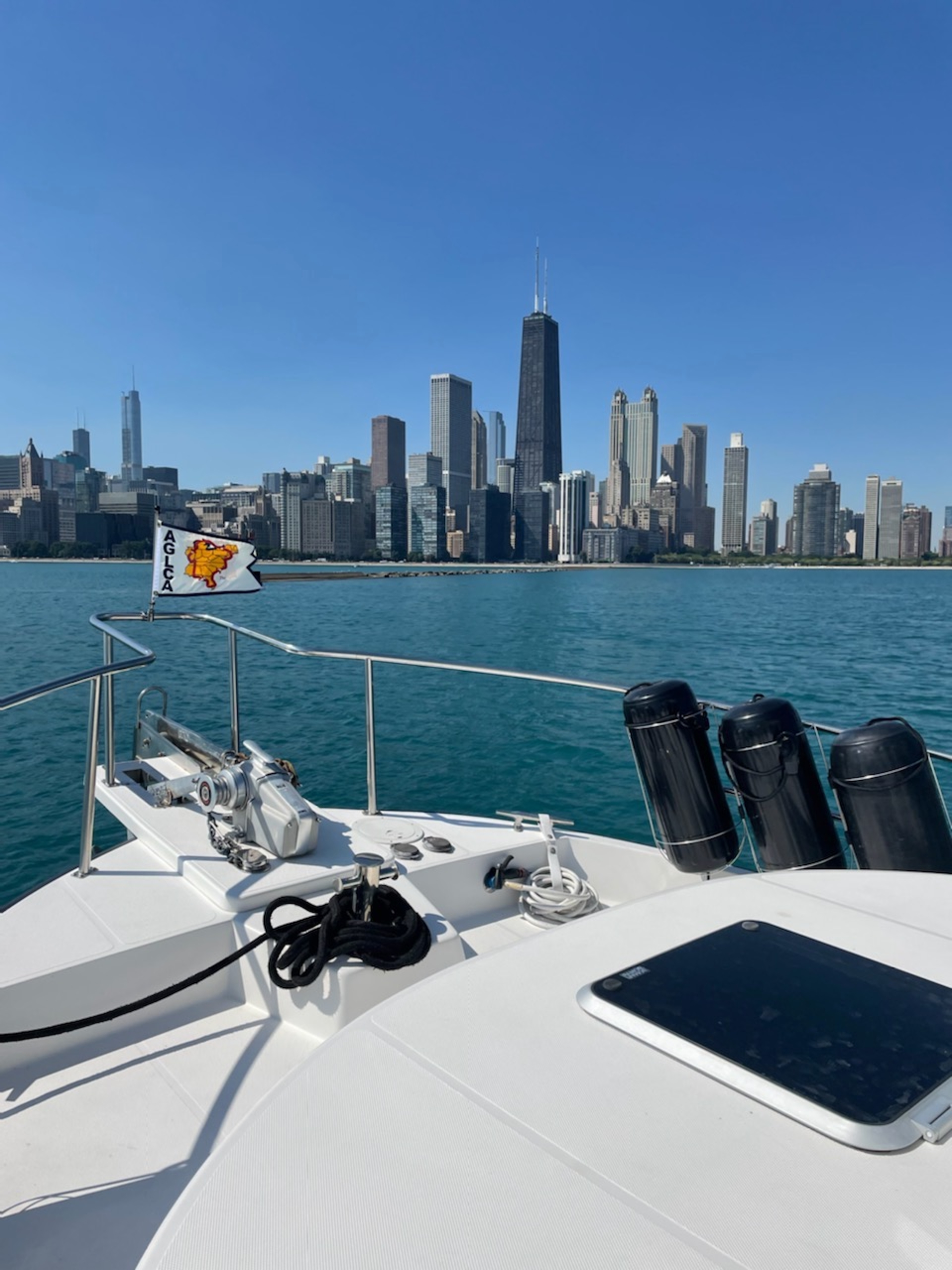 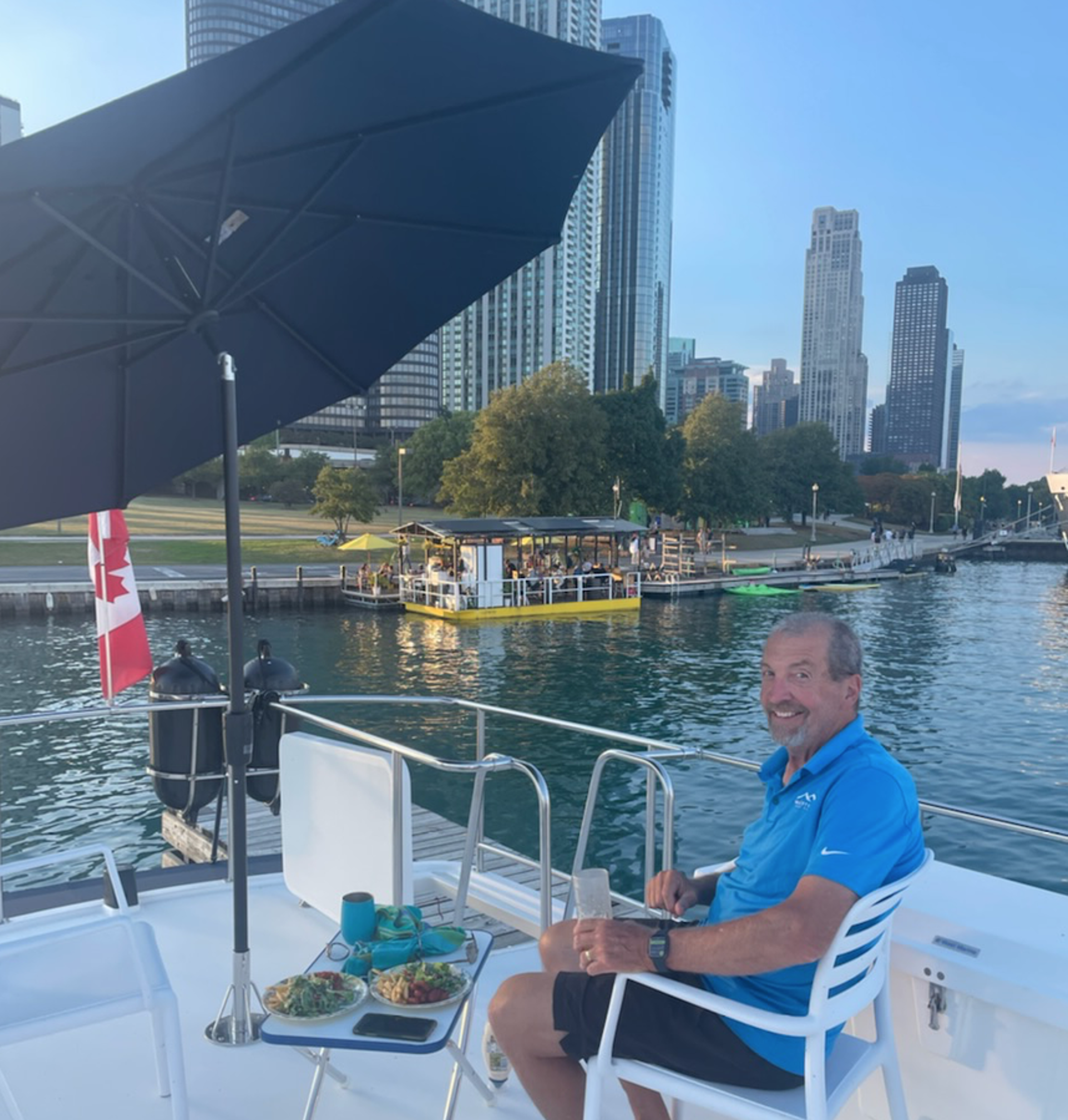 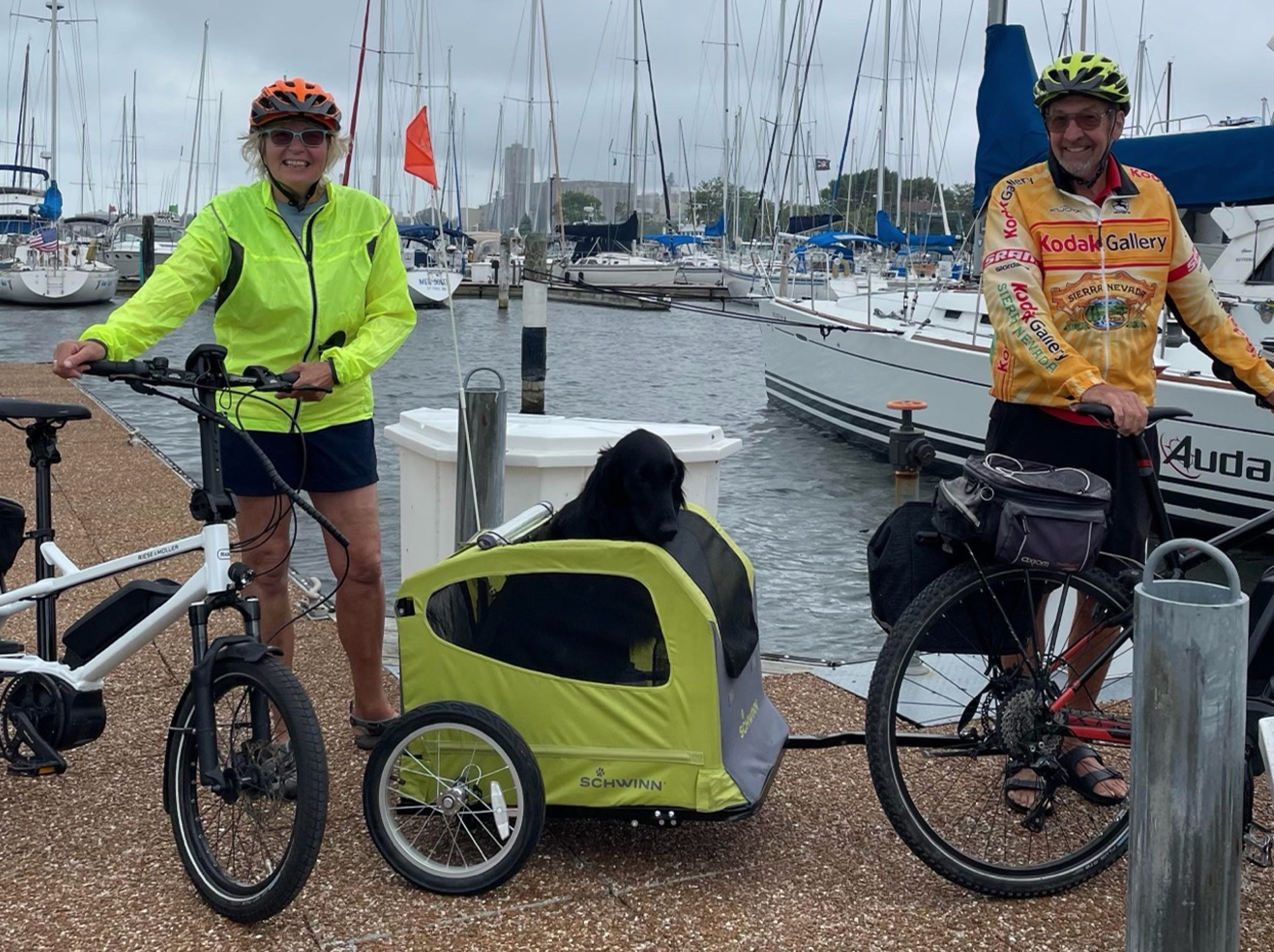 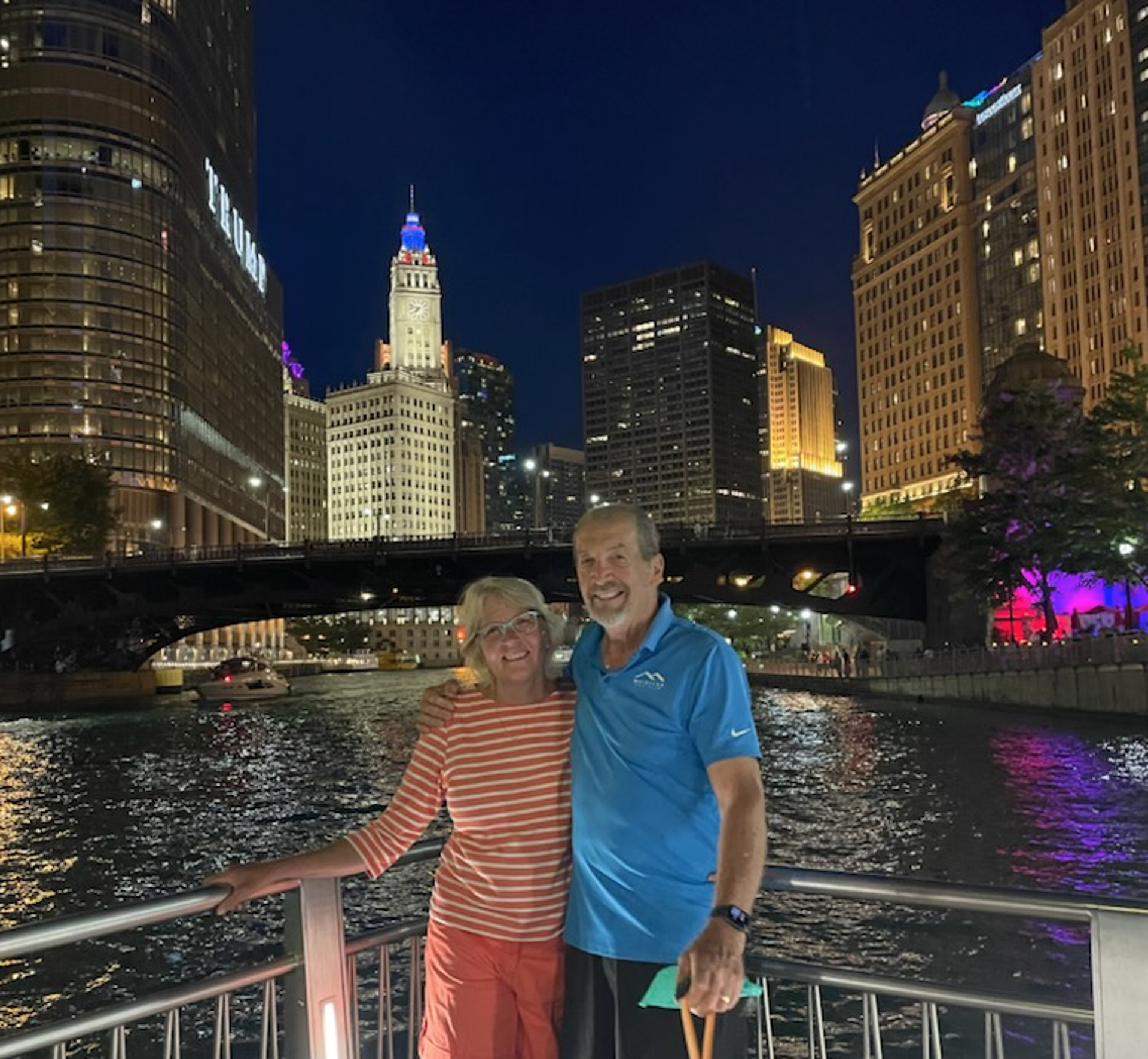 We’d like to share news from our lovely friends Tony and Ariën Knight who have sailed around the world and cruised extensively here in B.C.  They are now down in the U.S.A cruising The Great Lakes, doing The Loop and Inter Coastal Waterways aboard — Island Wanderer — their Nordic Tug 42.

Island Wanderer departed Sidney, B.C. on 15 July 2022 and cruised over to Seattle Yacht Service in Anacortes where she was hauled out of the water.  It took four days at the South Yard to remove the mast, both kayaks, solar panels, davit hoist, all antennas, all upper railings, conning tower, eye brow canvas , from the pilot house roof and the dinghy from the boat deck to stow for transportation in a 15’ U-Haul truck.  The exhaust lines for both the main engine and generator were drained, as well as the fresh and black water tanks, but a little fuel was kept in both diesel tanks.

On 1 August Associated Boat Transport loaded Island Wanderer onto a flat bed truck and measured her height at 16’ 1” off the ground.  This was very close to the 16’ max height regulated for clearance under the bridges that lay ahead of her 3287 km tarmac cruise across the USA to Marinette, Wisconsin.  State regulations at the time added an extra 500 km to the route which resulted in a road trip of seven days, Anacortes to Wisconsin.  Tony, Ariën and Jax (their dog) followed in the U-Haul.  All went well and they arrived at Nest Egg Marine on 8 August, with very little damage to Island Wanderer.  The port navigation light was brushed off by a branch and there were a few superficial scratches on the coach roof.  “Associated Boat Transport , is a professional and classy organisation,” says Tony, “they took care of all the repairs and buffing.  No questions asked !”

The Knights loved their stay at Nest Egg Marine.

“Nest Egg Marine is another classy organisation! All three of us were made to feel extremely welcome and were well cared for.  Ariën and I re-assembled Island Wanderer in less than a week, taking our time to get her ship shape and ready for the Great Lakes.  At 09.08 hours on Monday morning 15 August (8 minutes late!) terrified with only 3 feet under the keel, we made our way downstream and passed under the first ‘raised’ bridge to enter Green Bay.”

Island Wanderer cruised Door County for four days and then made for Sturgeon Bay YC. — Where Tony & Ariën rented a U-Haul truck (nothing else was available) to go to a Green Bay Packers game !  Next they transited the Sturgeon Canal into Lake Michigan, turned south hugging the shoreline, keeping about 3 nm out with only 30 feet under the keel.

“We enjoyed fantastic stops along the way – Kewaunee, Manitowoc, Port Washington, Milwaukee, Racine, Kenosha and Waukegan.  We loved every minute of our time on Lake Michigan. The marinas, the people and the fresh water – all fantastic.  We have have swum daily, struggling to keep Jax out of the water, which he can drink !  We arrived in Chicago on 8 September and moored at the Columbia Yacht Club. We are about to head off to enter our first lock and then head down the Chicago river.  It will be nerve wracking.”

In order to clear the 40 plus bridges Tony & Ariën lowered the three antennas and removed the cell antenna, anemometer and mast head light. This gave an air draft of 16’ 5 ¼”.  The lowest fixed bridge that they had to fit under was at mile 320.4 and measured 17’ 6 “.  Tight!

“We marked this height on a boat hook and Ariën stood at the bow holding up the boathook as we went under the low fixed bridges. We also had to calculate the ‘pole height’ for the time that we transited each bridge. I was at the helm ready to throw us into reverse if the boathook touched the bridge. Luckily the lowest bridge cleared the boathook by 18 inches.  Depth is another huge concern. It is terribly shallow in many places. Many marinas only have about six to eight feet of water, our draft is 4’ 4”.  So far so good.  We anchored on the inside of South Henry Island in 12.5 feet of water.  This is deep compared with many of the other marinas.  One of the Loopers ran aground and was stuck for 4 hours waiting for a tow. Fortunately the wake from a six-pack barge passing by was enough to float her off the mud. We then continued down the Illinois River to Peoria — Illinois Valley Yacht Club — where it is boiling hot and very windy.  Thank goodness for AirCon.  Now it’s time for a beer.” 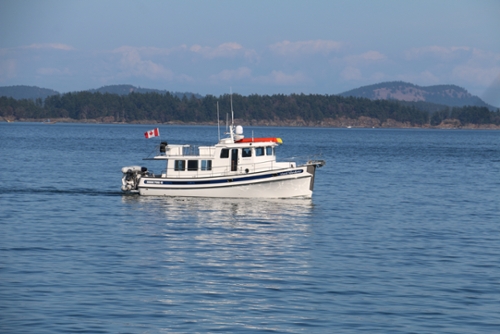 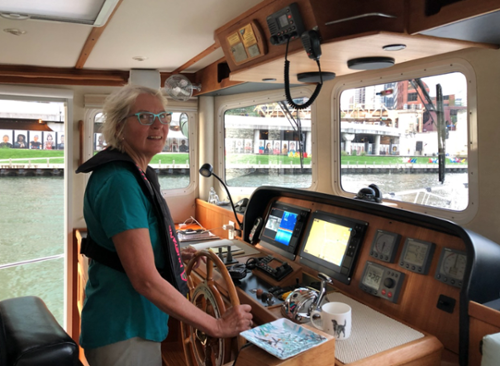 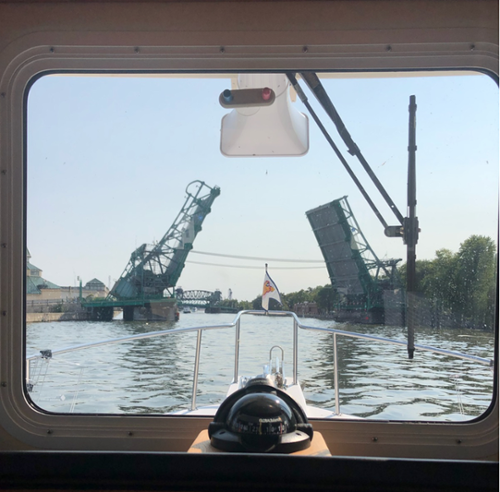 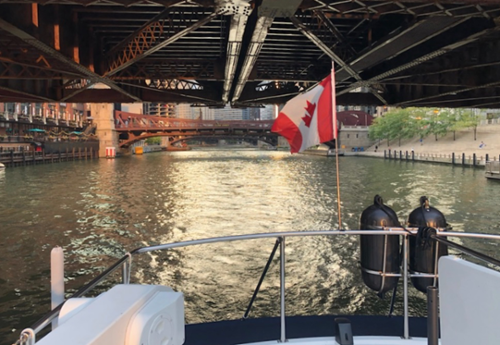 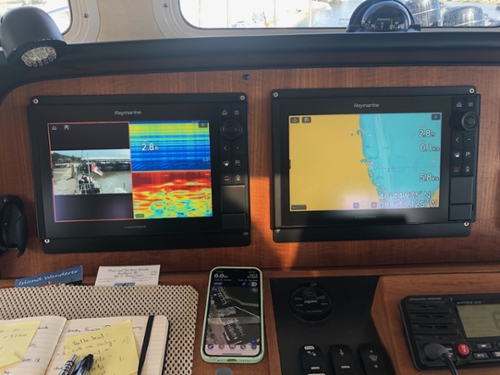 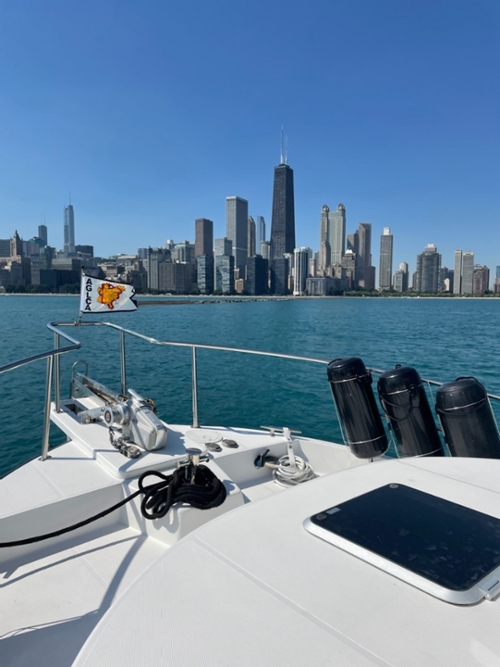 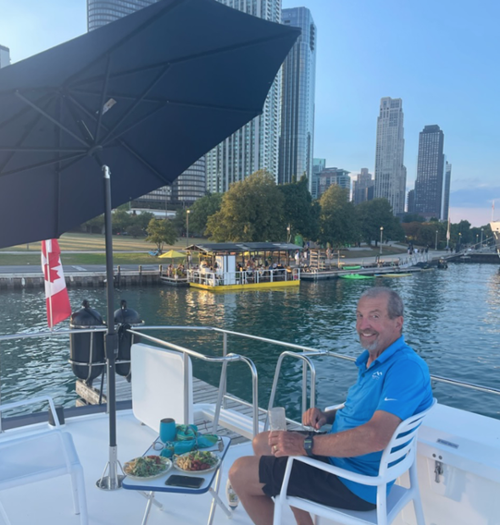 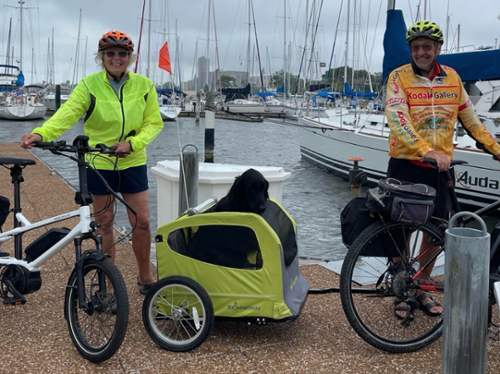 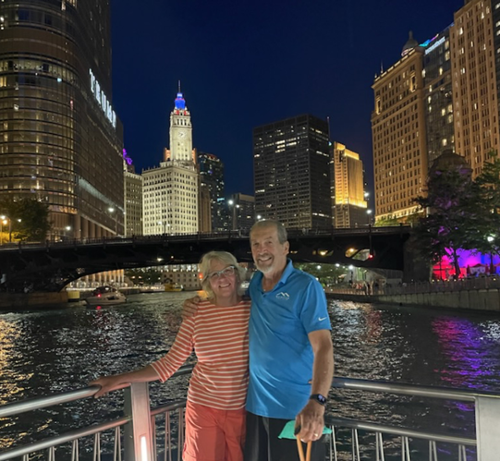